The Woman By the Train

Photo by Tom Leishman on Pexels.com

Last night I retired to the room as per usual, pulled the soft blue comforter over my head and turned on the tablet. I finished watching season 7 of Blacklist, a psychological crazybot about a criminal who has the FBI on a platter, and turned to the next episode of original Star Trek reruns.

Every night I fall asleep without thinking about it. I wake somewhere between 3 and 4pm. This morning in the black darkness I chopped up broccoli and pan-fried it in olive oil with garlic and salt. The roommate woke, shuffled into the kitchen, peeked in at the goings-on and shuffled back to bed without a word.

The autumn gray and cold has descended and I took my walk in the chill to the train station up the block.

Last summer it was a social center of sorts, with lots of homeless mixed in with cops and construction workers, vendors and travelers dotting the plaza.

I sit there and think. Sometimes I have an iced coffee, almost always a half-smoked cigarette. As the sun burned away the clouds about noon, my mind held conversations over whether I could work or not.

The thoughts meandered into the past and remembered myself as a twentysomething. I was a certified schizophrenic. The family and professionals both, however, were sort of blinded by my degree from an Ivy League school, and agree to set me loose in the workforce.

It was seven years of patchwork. Fired, hired, part-time, seasonal, even special projects, I gleaned paychecks from all over Manhattan, East Side, West Side, downtown, uptown, midtown. Some of the workplaces were calm and stable for a few months. Then I would buy things. Early on I was particularly proud of a pair of white high cut Reebok sneakers. Then there was the stereo system, a turntable, radio and tape deck. I started my own collection of ‘80s bubble gum rock vinyl—Madonna, George Michael, Willie Nelson, Tina Turner. Then there was the black and red Huffy ten-speed.

I took it on the train once to ride in an AIDS benefit in Central Park. I was a schizo set loose in New York. I think I did okay for a few years. The memories of that time surprise me. They make me aware of some sort of strength that I may need to draw on this next battleground—early old age.

I re-emerged in the ‘90s as a counselor in the city. It was ten years later, after hospital, rehab, and graduate school. I could read charts and write treatment plans. I was a respected professional.

The mind is a funny thing. Enumerating a checklist of benefits and resources while simultaneously dipping and swinging through a twilight zone of consciousness.

“Make sure she takes her meds so she can facilitate the next mental health meeting.”

I sit by the train station and watch an old woman push a cart filled with groceries. Her hair is silver, she is stooped and wrinkled, her shoes are torn Nikes and she is wearing a black coat.

From bubble gum pop, skinny bronzed girl in a bikini, to psych ward, to double door exit of writer and survivor. Here I am in a window of time to tell the tale. Before the dementia, before the decay starts.

And then there is another exit. Into who knows where. 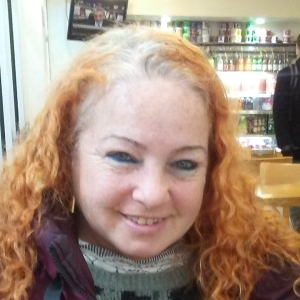 Ember Manos Belle is a 'Systems Advocate' and Behavioral Health Therapist in the NYC area. Ember is the author of Climbing Towards November (2009), and Pause in the Western Rhythm (2019).