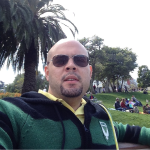 Finding the the most suitable mental health treatment fit can be difficult. Finding Appropriate Mental

The latest issue (Volume 5, Issue 1) of Psychreg Journal of Psychology (PJP) is now